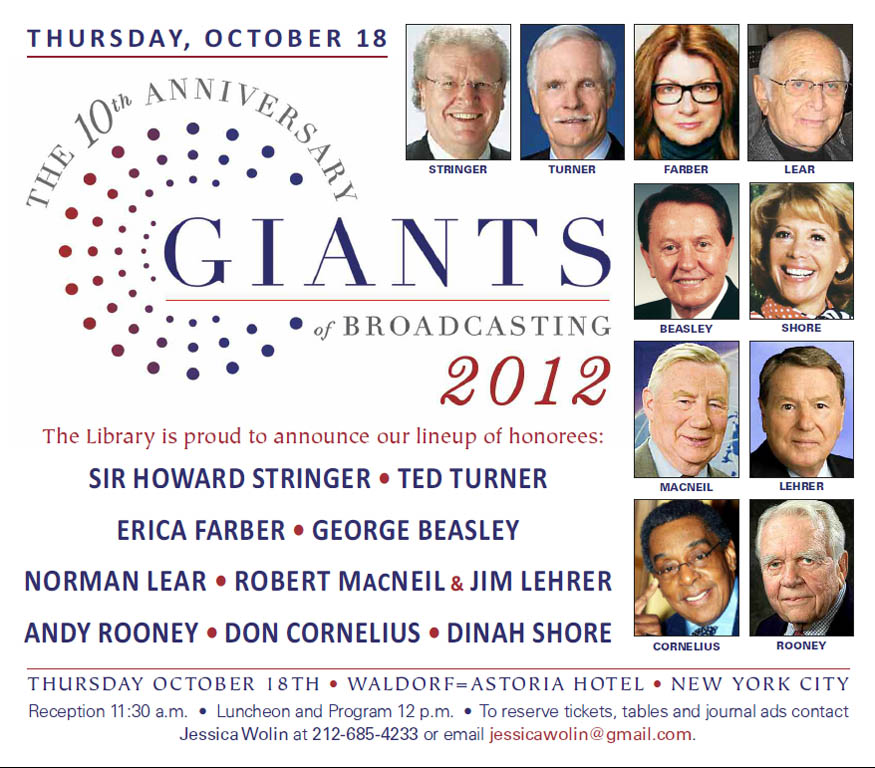 10 for 10th: Library of American Broadcasting

To Present Giants of Broadcasting Honors

The national Library of American Broadcasting will present its 10th Annual GIANTS OF BROADCASTING Honors at a ceremony and luncheon to be held on October 18, 2012, in New York City. The event, attended by prominent members of the broadcasting, media and corporate communities, serves as a tribute to those individuals who have played pivotal roles in creating and advancing the electronic arts. The distinguished honorees join 140 Giants of Broadcasting who have been honored by the Library since 2003. BILL BAKER, president emeritus of WNET New York and himself a Giant of Broadcasting, will serve as master of ceremonies.

The Library of American Broadcasting (LAB) — located at the University of Maryland — is entering its 41st year serving as the national information resource for the radio and television industries and the academic communities that rely upon it for depth and expertise. Its collections of historic documents, professional papers, oral and video histories, books and photographs are among the nation’s most extensive. LAB is evolving from a conventional library into a “homepage” for the world at large, no longer confined to responding to constituents one at a time but reaching thousands simultaneously through the Internet. Industry outreach includes lectures, symposia, print and the broadcast media themselves.

LAB’s chair is Virginia Hubbard Morris, president of Hubbard Radio, based in Minneapolis-St. Paul; the president/CEO is Donald West, veteran broadcast journalist and former assistant to the president of CBS Inc.; the dean of libraries at the University of Maryland is Patricia Steele, and the curator is Chuck Howell. 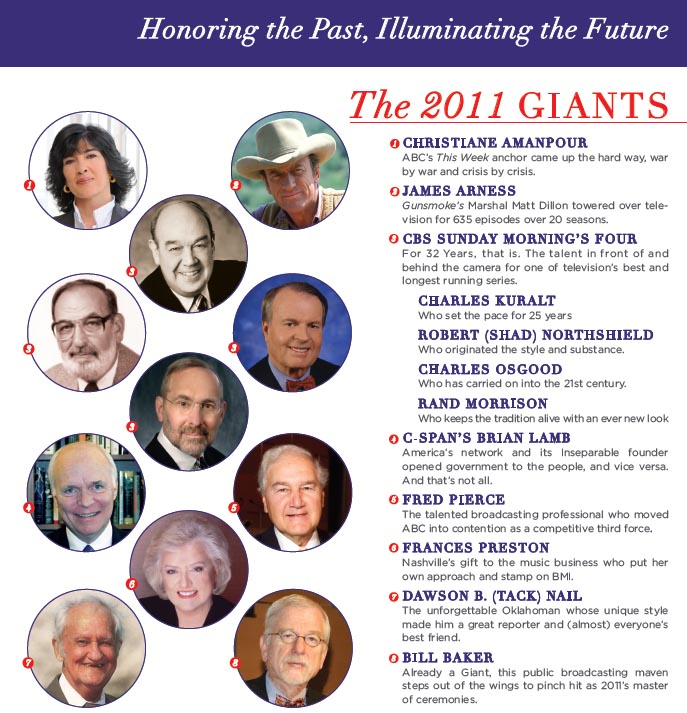 The Eighth Annual GIANTS OF BROADCASTING Awards Ceremony and Luncheon will take place in New York’s Grand Hyatt Hotel on OCTOBER 6, 2010, sponsored by the national LIBRARY OF AMERICAN BROADCASTING, which has among its life missions defining and honoring those individuals who played pivotal roles in creating and advancing the electronic arts. CHARLES OSGOOD of CBS Sunday Morning and CBS Radio will continue in his role as Master of Ceremonies. The luncheon is the Library’s largest fundraising event, providing the resources to maintain the nation’s most extensive broadcasting archives and collection of oral histories. The cocktail reception begins at 11:30 a.m. and the awards ceremony begins at noon. END_OF_DOCUMENT_TOKEN_TO_BE_REPLACED

The Library of American Broadcasting presents THE GIANTS. Honoring a lengthening line of excellence tracing back to broadcasting’s beginnings. Under the guidance of Charles Osgood, America’s Master of Ceremonies, at noon on October 1, 2009 (11:30 Reception & 12:00 Lunch & Awards Ceremony), in New York’s Grand Hyatt. And the honorees are…